Statistics and the COVID-19 Crisis

The news lately has been full of statistical concepts relating to the COVID-19 virus crisis. "Flattening the curve" has become a commonly used term. Critical decisions such as reopening businesses are being based upon testing results. Here's my take on these virus-related statistics based upon my nearly 20 years of teaching introductory-level statistics classes.
Statistics for small groups is pretty straight-forward: Test everyone and then calculate averages, make graphs, or do other summary statistics. This is called descriptive statistics. The simple goal is summarizing or describing what a group is like. An example might be a teacher summarizing the results of an exam by calculating a class average. This use of statistics is fairly simple to understand and interpret.
A more difficult situation occurs when we study small groups of people (samples) that are drawn from much larger groups of people (populations). This is called inferential statistics. We usually study samples of people because most populations are simply too large to study. For the virus situation, it would be impossible to simultaneously test 300+ million people in the United States at the same time. 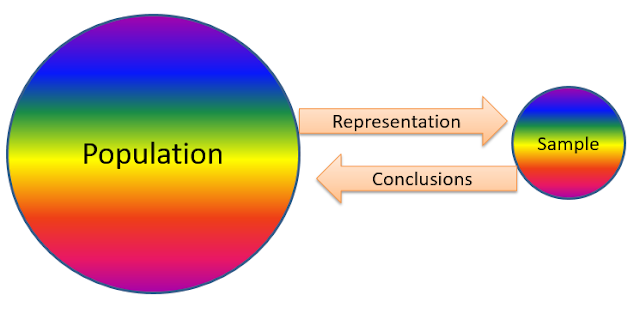 This second diagram represents a biased sample. It illustrates how a small sample might be quite different from the population that it was drawn from. The population has many colors, but the sample is only blue. Any conclusions made from this sample might be quite misleading because of the biased sample.
We are seeing some of these sampling limitations in the current COVID-19 virus crisis. The key question is how many people have been infected? The official numbers come from small samples due to the limited availability of testing kits. Only the sickest patients are being tested in many parts of the country. There is also the issue of false negatives: people who are disease carriers yet pass a virus test without showing signs of the disease.
Taken together, these issues suggest that the official numbers are underestimated. The true number of people who carry or die from the virus is likely higher than the official numbers. We don't really know for certain how many people have the virus in the population. It's a fuzzy picture of what's actually occurring. This statistical perspective is important to keep in mind when you see news stories about the number of people who have been infected.
Update: July 2, 2020
Several studies have been published since this blog post about the underestimation of cases. From Weinberger et al. (2020): "Official tallies of deaths due to COVID-19 underestimate the full increase in deaths associated with the pandemic in many states." The New York Times also has this nice summary of research from the CDC: "The number of coronavirus infections in many parts of the United States is more than 10 times higher than the reported rate, according to data released on Friday by the Centers for Disease Control and Prevention."
Posted by Gary Fisk at 9:26 AM No comments:

Email ThisBlogThis!Share to TwitterShare to FacebookShare to Pinterest
Labels: miscellaneous

Andrew Cuomo's briefings on the corona virus emergency are getting rave reviews. People are noticing his effective use of PowerPoint.


"Not since Steve Jobs’s iPhone keynote have people gotten so excited about a presentation. ... But with each briefing, it’s become increasingly apparent: There’s a secret star. His PowerPoint slides." Smith, Fast Company


"Cuomo's updates provide a lesson in the effective use of PowerPoint: His presentation slides are simple, clear and instructive." Gallo, Inc.

There's a reason why these PowerPoint presentations are working well. Many of his slides are following an assertion-evidence formatting style. The assertion is a bold statement at the top. The evidence is a graphic that supports the statement. It's a winning combination that's works well for the audience.

Here's an example. Notice the bold statement at the top (assertion). The graphic underneath supports the statement (evidence). 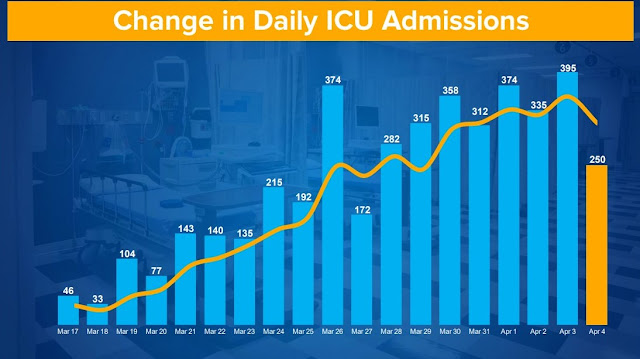 Looking through his slide decks there's something that is missing: Bullet points. Very few of the slides are following the standard bullet point formatting style. Check out these examples from News10.com. Maybe you should consider ditching your old bullet point formatted slides to follow this more effective assertion-evidence format.

I thank my friend and colleague Steve Haase for alerting me to this example.

Email ThisBlogThis!Share to TwitterShare to FacebookShare to Pinterest
Labels: assertion-evidence

I recently had the opportunity to help seven undergraduate students prepare for a presentation at a regional conference. These people are some of our best students. Four out of the seven students had slides that looked like this: 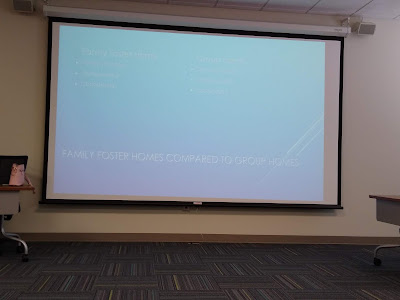 White text on a colored background becomes nearly invisible in our classrooms. It's washed out. Turning off all of the overhead lights doesn't help very much. There is too much ambient light coming in from the windows and an emergency overhead light that cannot be turned off.

The slides that had black text on a light background had much better visibility. It's a better sensory combination for most classrooms.

Slide designs and color combinations that look good on your office computer can completely fail during a presentation. The only way to be sure is to test the appearance in the classroom.
Posted by Gary Fisk at 1:34 PM No comments:

Slides for Students for Free!

Slides for Students is a book about teaching with PowerPoint. The inspiration for the book was that PowerPoint offered amazing possibilities, but my presentations didn't seem very engaging to the students. The mediocre student reaction occurred even though I was following widely-used presentation standards like bullet-point formatted lists. Slides for Students is an evidence-based approach to designing better educational presentations. The focus is on teaching, but other professionals like scientists, engineers, and business people might these ideas useful too.

UNG Press is offering free pdf downloads of this book for a limited time (until August) as part of their effort to help educators cope with the COVID-19 virus emergency. This is a $40 value! I appreciate their willingness to make this special offer.

The download link is available on the book's home page at UNG Press:
https://ung.edu/university-press/books/slides-for-students.php

More information about the book is available at this online Sway presentation:
http://slidesforstudents.com

I hope you find these presentation ideas to be useful for your students. Let's work together to make the term "Death by PowerPoint" an obsolete saying!
Posted by Gary Fisk at 12:55 PM No comments:

Email ThisBlogThis!Share to TwitterShare to FacebookShare to Pinterest
Labels: slides for students

A Quick Guide to Adding Multimedia to PowerPoint Presentations

There are several possibilities for adding narration and other forms of multimedia to PowerPoint presentations.

To begin, the right hardware is needed: A microphone for capturing voice and a webcam for video. Most laptop computers have these features built-in, but some desktops may be lacking this hardware. Webcams that include microphones are inexpensive (about $30) if your computer does not have microphone or video capture capabilities.

The most basic software option would be to use the presentation recording options in PowerPoint. These can be accessed using the “record slide show” option of the “slide show” tab. When a recording is started, PowerPoint will capture narration plus slide transitions, pen annotations (control-p), and laser pointer effects (control-left mouse button). The resulting multimedia presentation can be saved as a PowerPoint file. Another option is to export the narrated PowerPoint file to video (file > export > video) for sharing.

Adding audio and video to a presentation has a “wow!” factor, but there are some important downsides to consider. Multimedia requires a lot of data, resulting in large files. People with slow or unreliable internet connections could have difficulty accessing these files. If the presentation is shared as a PowerPoint file, the viewer will also need to have PowerPoint software to open the file. This can be problematic because not everyone has this software due to the expense. Finally, the creation of files with audio and video can be technically demanding and labor intensive for the presenter.

One way to overcome this problem is to use the “notes” feature to write short descriptions of the essential ideas from each PowerPoint slide. The aim is to add important information that would ordinarily be spoken. The slides plus notes can then be shared with students by printing the file to a .pdf format (portable document format) for sharing on a learning management system. 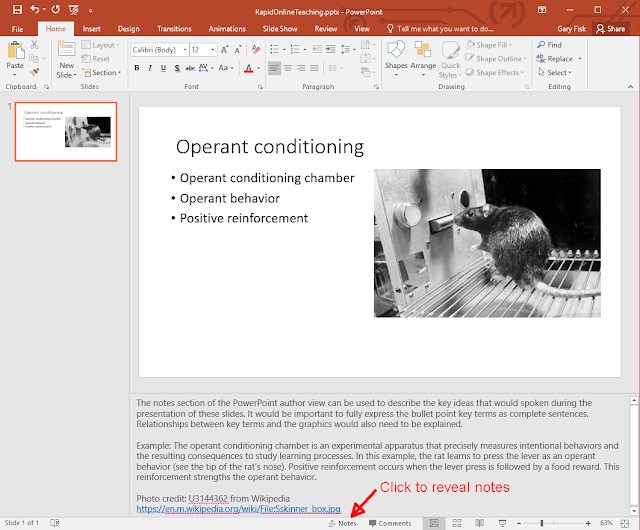 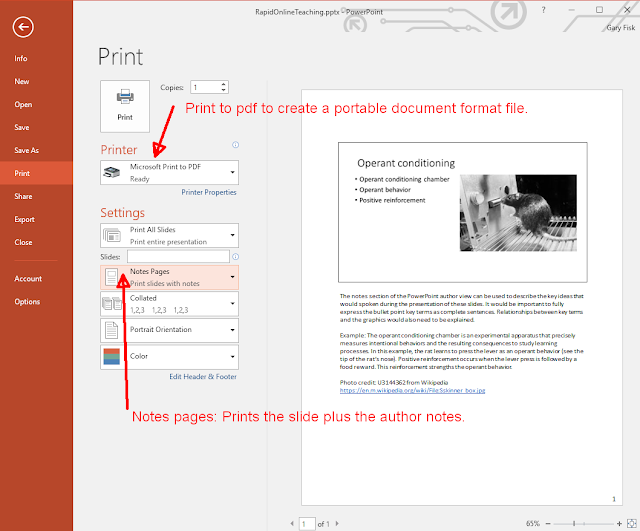 Creating a pdf file for sharing with students is recommended because pdf files are easier to view than PowerPoint files. The hyperlinks to relevant information are preserved in the pdf file.

There are other possibilities for adding the spoken component to a file that can be shared. The command “record slide show” from the “slide show” tab can capture voice with the slides, which can then be saved and shared. Software applications like Camtasia can add additional multimedia features, such as video. The downsides are that this approach is time-consuming and requires more technical expertise. It can also be problematic for students that don't have access to optimum technology.

Good luck with your efforts to move course content online!

I thank Ellen Cotter and Steve Haase for their helpful feedback on this idea.

Please feel free to save or share the following files that describe this approach.

How to remember protoanopia, deuteranopia, and tritanopia

Dichromatism is a form of color blindness in which one of the three cone receptor subtypes is missing or abnormal. There are three possible forms, which are protoanopia, deuteranopia, and tritanopia.

It has been difficult for me to remember which name represents which form of dichromatism even though I have taught this topic for a long time. The names really didn't make much sense.

Today, this mental block was resolved. Here's a way to remember these forms and their underlying issues.


This scheme is ordered 1, 2, and 3 for the long, medium, and short wavelengths, respectively. Problem solved!
Posted by Gary Fisk at 2:41 PM No comments:

Gary Fisk
I am an experimental psychologist with research interests in PowerPoint, perception, and the application of psychology to everyday life. 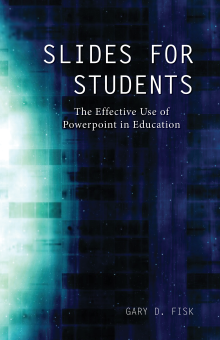 Purchase the book from Amazon.com